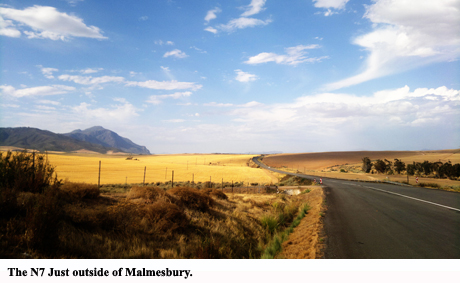 I was standing on the N12, just outside Modderrivier, a tiny town about 50km south of Kimberley, on the tail end of a five day hitchhiking trip. The day before I’d watched the Proteas against Sri Lanka in Kimberley, stayed the night at a friend, and now I was ready for home. In the four days before I’d had ten lifts, strolled through the Karoo in 40 degree heat, slept on the verandah of a farmer who offered me accommodation for the night, sat at a petrol station from ten in the evening to three in the morning, waiting for the lorry driver who’d promised me a lift through the night to wake up, scared he’d slip off if I slipped off. I’d been hungry, tired, weary, full of fear and peace, and sometimes bliss. I was dirty and worn (it doesn’t take long) and satisfied. The open road had delivered, and now I was ready for home. Cars passed. All shapes. 4x4’s, trucks, hatchbacks, a tractor. Who would pick me up?
A battered old Datsun bakkie, a tiny little fourteen hundred with a chipped blue body and a cracked canopy, a game little car, slowly pulled up next to me. There was a black man sitting inside, a young black man, on his own, some tattered luggage in the back. He eyed me. I bent to look in the window, wondering what he wanted, he didn’t seem the type to give lifts. No smile, everything slow and weird, his car wasn’t even properly pulled over, still half in the road.
‘I don’t have any money,’ I said to him, ‘I’m hitchhiking.’
He kept eyeing me, looking me up and down.
‘Can I get a ride?’
He kept staring, then slowly, he nodded.
‘Great,’ I said. He could be as weird as he liked, I was getting out of there. I chucked my rucksack in the back and sat way down into the cab, low down, practically on top of him. We moved off, slowly, and he still wasn’t saying anything. I tried some exploratories.
‘What do you think of Bafana Bafana?’ I asked. ‘Bad, hey?’
‘I don’t have a TV,’ he said, a slight apology, then quiet.
‘He’s got no English,’ I thought, ‘how is this going to go? We’ve got 400k’s, how am I going to deal with this?’ I decided I’ll get him, I’d find something that we both care about, and crack him. I’d open him up and we’d talk all the way, we’d discover we understand each other, we’d feel like brothers by the end. So I kept trying, but still, nothing.
‘It must be the language,’ I thought. Because he’s hesitant, thinking more than he’s actually saying. I started to leave it, deciding to just sit back into the silence and watch the thunder brewing out over the grasslands, with the kopies swelling up, and the scattered, thorny trees.

‘Do you drive?’ he asked, all of a sudden.
‘Yes, I drive,’ I said, watching his eyes, ‘you want me to drive?’
He smiled, shyly, and all was revealed. He’s tired, I realised, and he needed some help.
‘It’s a long journey,’ he said, apologising, ‘have you got a license?’
Damn. I remembered just then. I’d left my wallet at home, deciding to only carry a little cash, no cards.
‘No,’ I said, ‘I don’t. But I’ve got my passport.’
‘That won’t work,’ he said, ‘you need a license.’
‘I’ve got one,’ I replied, ‘it’s just not with me.’
What to do?
‘How much is the fine?’ I asked. ‘I’ll pay half of it. I don’t have any money on me now, but I’ll send it to you. I promise.’
He didn’t answer, he was thinking.
‘What is it?’ I pressed, ‘two fifty?’
‘No, it’s five hundred.’
Five hundred. For me, that’s a chunk, a good, healthy chunk of money.
‘Okay,’ I said, ‘I’ll pay the whole thing.’He looked at me, unmoved, still thinking.
‘I came up this road yesterday,’ I said, ‘there’s nothing. No cops. It’s clear.’
He started slowing, and stopped, and I got out and jogged around to the drivers side. ‘Why am I so keen to drive?’ I wondered. Because it would be something new. Because hitching is about new experiences, and any new thing on the open road is another adventure, another summer storm, another meal of the mind. I sat way down into the cramped, sagging seat, the accelerator rod with no pedal, the hazards that didn’t work, the tricky starter, and we went.
Immediately things were different. My man was relaxed in the passenger seat, looking happy, looking five years younger, and we started to chat. His English was great. He told me his name was Benias, Ben to his friends. He’s got a four year old daughter from a broken relationship, one where they nearly married. He said he sells curtains and brass fittings for a living, door to door, offering black and coloured housewives three month lay-bye terms, the whites always paying cash. He told me when he’s selling he’s got to get the woman to sign the contract, not the man, because women always pay, if their name is on the contract they’ll pay. But the curtain business is slowing down, over saturated, he said, and now he’s looking to join his cousin as a mechanic in his garage in Kimberley, because he’s a trained mechanic, and can fix any car. He’s going to outsource his business, keep it going, but move on. Because he’s got plans. He doesn’t drink, he doesn’t smoke, and the kilometres rolled by.
By the time we hit Britstown, around 217 k’s later, we’d got a feeling for each other. We could’ve been brothers. The mood was sweet, we’d been in the little bakkie for what seemed like lifetimes. I suggested we stop for a leg stretch and a sip of water.
‘You want a cooldrink?’ he asked.
‘No,’ I said, ‘thanks. I’ll just get some water.’
I visited the toilet then returned, once again climbing way down into the little blue painted cab. He handed me a fat, cold, 500ml plastic bottled coke, beautiful in the heat. I knew how much it cost. Things are expensive nowadays. Petrol, rent, kids, food, spare parts for a car.
‘Thanks!’ I said, really delighted, really unexpected.
‘It’s just a coke,’ he said, laughing at me.
‘No,’ I said, ‘it’s not. It’s a gift. Thanks, man. Thanks a lot.’
I turned the key and we get going, driving on, and on, I was slowly getting home.