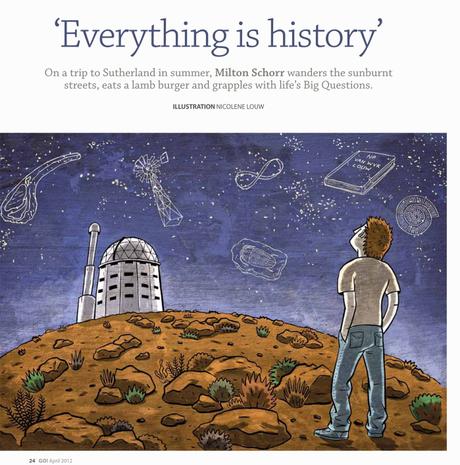 When she was young, Rita Wagener asked her father: “Where does the universe end?” Her father replied, “Nowhere. It just goes up and up and up.” “But it can’t,” she said.
“Okay, let’s say it ends. Somewhere up there. High, high, up there. It ends. Agreed?”
“Yes.”
“Now, what’s beyond that?”
Rita lives in the Karoo town of Sutherland. She grew up in Sutherland, moved away, and returned 10 years ago to open a guesthouse and caravan park with her husband Jurg. Our conversation has gone beyond the formalities of my campsite booking. It’s the stars, you see, and the earth. Conditions for astronomy in Sutherland are among the best in the world. The air is crisp and clear, and there is very little light pollution. The land, too, is ancient. Fossils lie buried in the rugged hills and a prehistoric volcano – Salpeterkop – is only 30 km away. It last erupted some 65 million years ago. Out here, Rita says, it’s as if you can see and feel the moment of Creation, and your own place in the universe is put into perspective.

I arrived in town on a hot, dusty November morning. The place was spectacularly quiet; there was no movement on the wide main street. I assumed everyone was hiding from the sun.
I wandered into Magda se Winkel on the road to the observatory and owner Magda Augustuyn introduced me to the specifics of life in Sutherland: In winter the pipes freeze and burst, snow falls thickly and the town is packed with tourists. In summer the pace of life slows to a crawl.
Theo Wolfhaardt, the owner of Jupiter Guesthouse, told me more while I devoured a lamb burger for lunch: “You put a beer outside in winter and it freezes. Once, I left a sprinkler on overnight. The next morning the fence was a sheet of ice.”
Right now, that seems impossible. It’s 1 pm and the heat has already sucked me dry.

Sutherland was established in 1858, but sheep farmers had been here long before then. The farmers kept two households, one on the Roggeveld plateau and the other down on the more temperate plains towards Matjiesfontein. By moving their flocks seasonally they could ensure good grazing and avoid the frost that obliterates everything on the plateau in winter.
Some time in the mid-19th century, a Sutherland resident named Daniel Esterhuyse mistakenly fed his son a poisonous berry that killed him, and he spent the rest of his life writing sad poems of regret.

As I walk along the untarred streets under the blistering sun I can feel the toughness, the history and the heartbreak of life in this isolated place.
Esterhuyse isn’t the only poet Sutherland has produced. NP van Wyk Louw of Raka fame was also born here. His verse speaks of silent, forgotten dams at dusk, of the veld and the open vault of the sky. Rykie Louw (no relation), a tour guide at the Louw Huis Museum, reads some of it to me. The language pops and crackles, arid and succulent at the same time. She tells me that back in the 1970s, before TV, what she liked to do was listen in on telephone conversations. It wasn’t easy, she says: a careless pickup or a misplaced breath would blow the whole operation.
I can see it: a solitary line running from farm to farm, gossip travelling along it like Morse code and a whole community of wives sitting dead still, receivers cupped to their ears.

“Everything is history,” says Jurg Wagener later, training his telescope on the moon. “The things you see in the sky have already happened.”
He points to Aldebaran, the red eye of Taurus the bull. The light we can see now was emitted 65 years ago. He turns the scope towards the moon and I see deep craters and the line of shadow where the moon turns away from the sun.
I feel a jolt inside – I’ve never seen the moon this close before. Jurg pierces the sky with his green laser, this time pointing out Betelgeuse, an orange dot on the eastern horizon.
“That speck of light happened 640 years ago,” he says. “We don’t know what’s out there now.”
I feel my mind expanding – huge, impossible distances becoming tangible.
“The biggest known body in the universe is called Canis Majoris,” Jurg continues. “If the earth were the size of a 20c coin, Canis Majoris would be more than a kilometre in diameter – 1 800 times bigger than the sun.”
I imagine a raging inferno of burning gas, looming up over our little blue planet, all-consuming, bigger than everything.

The next morning I go for a walk on Middelfontein farm just outside town with Patrick and Dee, my neighbours in the campsite. The experience is simple and satisfying. A breeze cuts through the heat and the marked route is easy to follow. We stop to look at strange shrubs and succulents with names like renosterbos, boegoekaroo and Medusa’s head; we see an animal pen built by settlers; and look over the valley at more washed-out hills, brown-orange rocks and endless sky.
Later, we go on a guided tour of the Southern African Large Telescope. With its 11 m mirror, SALT can see specks of light a billion times too faint for the human eye to make out. That’s like being able to read a newspaper over an astronaut’s shoulder or see a candle burning on the moon.
The astronomers who use SALT are not concerned with the moon, though. By analysing those specks of light, decoding them into numbers too large to write, they’re trying to piece together the mystery of life. How did we get here? Why?
A thought occurs to me: The observatory is like a space station. The telescopes are landlocked spaceships and the astronomers are the astronauts, exploring the cosmos behind their computer screens, fragment by fragment.
It’s the second time I’m visiting the observatory today. Earlier, I woke up when it was still dark and drove up here to take photographs of the sunrise. Standing among the telescope domes, I saw my shadow suddenly appear as the sun crested a hill.
Everything is history, even the present. Somehow I had come to be the person standing on this koppie at dawn, blocking the sun’s light. Just thinking about it made me feel dizzy.

On my last day in Sutherland I take an afternoon drive to the summit of Ouberg Pass. I’m told that on a clear day you can see all the way to Ceres, 200 km away. The dirt road that leads to the pass is rutted and the sun is close to setting when I arrive. A strong wind rips at my clothes where I sit on the edge of the plateau, thinking of the annual trek the farmers made – up and down as the seasons turned.
The sun sets, the valley fades into darkness and I drive back to town. Halfway there I stop the car and turn off the engine. I listen to the sound of the veld. Behind the wind, silence. I breathe deeply, trying to take it all in so I can carry the feeling home with me tomorrow. Slowly, one by one, the stars come out. I think again of Rita’s story.
“The mistake is to assume that the universe has an end,” her father told her. “It’s a circle. There’s no end. It just goes round and round.”