I was driving along the M3 today, turning up to Ou Kaapse Weg on my way to Kommetjie, when I saw a young hitch-hiker on the side of the road. Seeing him brought a flood of memories. When I was younger I did a lot of hitch-hiking, what seems like years of standing on road-sides just like that, my thumb out just like that, waiting, just like that. I’ve gone all round the country. I’ve spent time with hundreds of strangers, talking the day and the night away. I’ve felt that freedom, that feeling that I know every hiker has. To put it in words goes something like this: If you’re patient enough, and willing enough, you can go anywhere. Before I know it my mind drifts, and I’m thinking back, tracing the evolution of that feeling of freedom for me, wondering where it went because I know I haven’t felt it in a long time.


I did my first hitch-hike at the age of fourteen. I grew up around the town of Vredenburg out on the West Coast, and one day my sisters boyfriend, an older guy, said to me, ‘Come on, lets go to Saldanha.’
I asked him how we’d get there.
‘We’ll hitch,’ he said.
A little later I found myself standing on the side of a dusty and sun drenched road, throwing stones at some rusting thing in the bush, the ocean spread around. I felt grand, and tough, and I did my best to be cool. There was something about standing out in the open that I liked, as if the road was a river and we had our lines cast, waiting for the unknown to latch on. Everytime we heard the drone of a car we took a pose and stuck our thumbs out, wondering if this would be the one. Each time our excitement rose, the car getting nearer and nearer, the face of the driver getting clearer and clearer, until we could see him and we tried to smile our way in. Each time the car went straight past. We went back to chatting and waiting, letting the feeling subside. I wondered if we’d ever get one. Finally, a big Valiant Duster slowed. What a change, a total 180 in our situation. We whooped and ran for it. Now, a Valiant is a dream of a car, a big, chunky thing with a growling V8 engine. The kind of car that can sit four on the single length front seat no problem, and in this part of the world can tow a 12 man, 20 foot fishing boat without a strain. The driver was a fisherman too, an ocean being with a grin and a smoke clamped between his teeth. With eyes like the sky he declared that he was going half-way to Saldanha, and we piled in. As he drove I soaked it up. The frayed interior, the tear in the back seat, the smell, the feel. I listened as they chatted, and later, after he dropped us off and we were back on the road, half-way to where we were going, half-way away from home, I figured it out. This was freedom. The world around wasn’t unknown anymore. Everything was an adventure waiting to happen.

And so the hiking began. Langebaanweg, Saldanha, Langebaan itself. Fifty kilo’s was nothing, a hundred was nothing, all it took was a willingness and a patience. Willingness to connect with whoever might be friendly or warm enough to stop, and patience to stand, and stand, and stand some more. My friends and I roamed all over that country. From St Helena Bay in the morning forty kilo’s out to Langebaanweg, from there we’d cut through to the Engen on the West Coast road, then to the Namakwa Sands turn-off to Saldanha, and the military base, where another friend lived, and where we’d sleep warm in old World War 2 bunkers filled with hay. Every lift was different. There was the quiet one, the one who you wonder why he picked you up in the first place, not even looking at you but giving a good polite good-bye at the end. The talker, incessant cigarettes down his throat as he methodically explains anything that comes to his West Coast soaked mind, staring through a cracked windscreen. And the comedians, the two mates going surfing at Trekoskraal, all animated and up for it and climbing back over the seat with another bright-eyed anecdote and gutsy, surf-tinted laugh. The house-wife with her twelve year old in the back or the guy you know from school who’s old enough to drive. The uncle from the video shop who turns out to know everything about everybody, or the lorry driver of the factory your friend’s mother works at, on and on.

As I got older the hikes got longer. I looked east to Cape Town, the big city, and one day I took my young freedom in my hands and went. The hike was the biggest ever but I was infinitely armed and infinitely secure. I knew I’d get a lift. I just needed patience, willingness. As the high-rise buildings rolled in so did different attitudes, different points of view, and my young mind absorbed them all. Hout Bay, Kommetjie, Durbanville, Brackenfell. 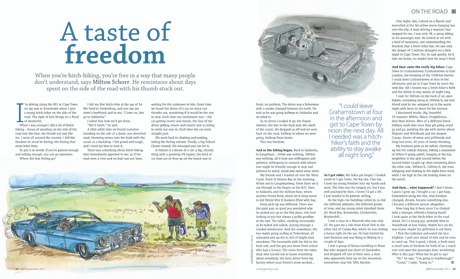 I met a man in a Maserati who was only twenty-one.He gave me a ride from Kloof Nek to the bottom end of Camps Bay, where he was renting a house right on the water. He had created his own business and was on his way to Beijing as an ambassador. I met a group of Rasta’s travelling to Hout Bay who stopped just short of Llundudno and dropped off one of their own, a man who I learned lived up in the mountain, somewhere on the tenth apostle. I was told there was a shack there, as old as the hills, and that he spent his days there, practising his faith in the natural way, looking out to sea. One night, late, I stood on the fly-over highway and marvelled at the full and fat yellow moon hanging low over the city. A man from Vasco driving a maroon Tazz stopped for me. I was only eighteen then, a sprog sitting in his passenger seat. He looked me up and down and didn’t understand the freedom that a hiker has, he saw only the danger of the City night and the danger of strangers, all 3 million of them, and quietly said no, he’d take me home, no matter that it was an extra forty minutes of driving.

And then came the big hikes. Cape Town to Grahamstown, Grahamstown to East London, the breaking of the thousand k barrier. I found that I could leave Grahamstown at four in the afternoon and hit Cape Town by noon the next day. All I needed was my adventuring spirit, my hiker’s faith, and the ability to stay awake all night long. I experienced 300 k’s on the back of an open bakkie screaming along at 140, a best friend next to me, a warm night wrapping us up and beers to share for the duration. I discovered trucks. Big, beautiful, 35 tonners. MANs, Mercs, Hinos, Freightliners. And their drivers. Men of a different breed for certain. Solitary souls who once they got going could go and go, painting the sky with stories of travel. Tales of Maputo and Windhoek and the deepest Congo. Stories of wives and girlfriends and long lost loves, thirty years of long, lonely thinking. My horizons grew as we talked and churned up the N2 just outside of Knysna, hitting a maximum of thirty going up that long hill and then hanging at the top, weightless as we waited for the second trailer to join us, then screaming down, 35 tons firing up to 100, 120, the night time trees whipping and shaking in the night time winds while we sat up high in the cab, looking down on the world.

And then… what happened? I don’t know. I guess I grew up. I bought a car. I got busy. Somehow, somewhere, all that, all the freedom and openness and the boundary-less days changed, shrank, became something else, until I seemed to be a different soul altogether. Thinking now I’m conscious of how long its been since I’ve chatted with a stranger, offered an unknown a helping hand.

I look again at the hiker standing ahead. He’s a young guy, he probably lives out in Noordhoek or Sun Valley or somewhere, perhaps on his way home, perhaps his girlfriend is out there. I click on the indicator and I see his face change, brighten up, a total 180 for both of us. I pull up ahead of him and see him running in the rearview mirror. I reach over and pull the passenger door open, wondering. Who is this guy? What’s he going to tell me? What’s he got to say? This is good, I think, this is the beginning of something different, something unknown, a small taste of freedom for a hard working drone.
‘Hi,’ he says, ‘I’m going to Scarborough.’
‘Great,’ I say, ‘get in.’