“I’m never really scared when I fight. I’m more anxious. I’m anxious because I want to know what’s going to happen. I’m thinking … I’ve been submitted in the gym, I’ve been hit in the gym, I’ve had it all done to me. I’m here now. There’s no turning away now. So I may as well fight, because what else is there to do?”
Don Madge is 22 years old. He’s currently ranked second in the world as a muay thai fighter in his division (World Professional Muay Thai Federation), and fourth in the lightweight rankings of our own EFC Africa MMA (Mixed Martial Arts) organisation. This is a big deal. MMA is currently the fastest growing sport in the world, regularly outpacing both professional boxing and wrestling in viewership ratings, and the EFC are currently the second biggest organisation on the globe. Broadcasting to 108 different countries with live broadcasts to the USA, Canada, the Caribbean and most of the African continent, Don’s presence there means he’s a rising global star. He lives in Cape Town where he owns and is head coach at the Phoenix Muay Thai & MMA gym, and he’s invited me to train with him and some of his guys at 4pm on a Tuesday afternoon, to get a good feel for what the sport is all about.
“You ready?” asks Don.
“I am,” I reply. I have a little experience with this sort of thing. I wrestled as a youngster, and did a boxing class a few weeks ago. But MMA is a different beast. An amalgamation of all of the Martial Arts from all over the world, the sport has fused itself into a modern fighting system based only on what works best. MMA asks for total ability – fighters must be lethal on the ground in the wrestling and grappling arts, deadly in the clinch (the science of leverage and weight distribution while standing in close quarters), and powerful in the striking arena where all limbs are weapons bar the head. 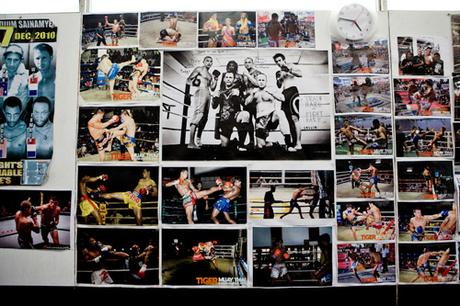 We get going, jogging in a circle on the mat. Forwards, backwards, sudden falling to the floor then back up again, different variations, Don dropping commands and we follow, sweat beginning to pour. Don is preparing for a fight this following Friday which means he’s at the height of his fight camp, training three one and a half to two hour sessions a day whilst also teaching in between. This is absolutely normal for a top level MMA fighter. He’s also cutting weight. Currently sitting at 76 kilos he needs to be 70.6kg or under come next week Thursday, a week and two days away.
“For my previous fight I cut 13 kilos in six weeks,” he told me earlier, “it wasn’t easy, but it’s do-able.” The technique to it, he said, is simple; take in less than you use. If you’re burning 3500 calories a day, eat 3000. For the last two days, depending on where he is, he’ll stop eating and drinking entirely. He’ll have his last sip on the Tuesday night but still continue training. “Water can be your worst enemy. Water makes you put on that weight. You sweat out as much as you need.”
Warm-up over Don breaks us into pairs. All the guys collect their gear, strapping on boxing gloves and thick, shiny black shin pads. I fish a pair of each from a pile lying littered around the gym’s empty boxing ring. I look into it.
“This is Chute Boxing,” says Don, “we work the hands and go for takedowns. Three rounds.” He hits a timer and we go. I touch gloves with a fighter then watch his eyes, his raised fists sitting just underneath them. I don’t know what to do with my hands. I use what little I remember of wrestling, shooting for his legs but he sprawls then he’s on my back, his forearm around my neck, squeezing. I can’t swallow, can’t breathe. He lets go and we go again. Don calls time, everyone swaps and this time I’m partnered with him.
“Keep your head up,” he says. “You’re tall, you want to keep your opponent away from you, that’s your advantage.”
I try to keep my head up.
“Look,” he says, stopping. “Put your hand out.”
I do and he puts his forehead against it. He reaches out to my face but his hand stops about five centimetres short.
“Your reach is longer. Stay away from me, keep your head up.”
We go again and I try, but I get confused because he feints with his right so that I’m watching his fist but suddenly his foot whacks me in the head.
“Don’t watch my hands,” says Don, “watch my eyes.”
I watch his eyes. His other foot smacks me on the other side.
“That’s good,” says Don, smiling, “keep working.”

Ten minutes later I’m staring at the inside of a toilet bowl. I ate a banana before the session thinking it would give me energy, and now I want it out. I’m exhausted and shaky. Out there no one talks, constantly working. Swap partners, break, start a round, end a round, break, new exercise.
A guy moves through to the other cubicle, flashes me a friendly smile and says, “train hard, fight easy, man.”
I sit out a round. Don notices and nods, giving me a quick thumbs up before grabbing a student to demonstrate on. Watching them I understand something. These guys aren’t fighting, they’re not learning to fight. It’s more than that. Every single thing they’re doing is specific, a specific art and a specific technique with specific outcomes. They’re preparing to test themselves. They’re doing everything possible to make sure that when the time comes they execute well and in the process make their coach, their team, themselves and their training proud. The ultimate goal of MMA is to assert your will onto your opponent. Your will is asserted through being ready - in body and mind and technique and skill, to do what you were taught when it really matters.
“Keep your head in his chest,” Don’s saying, still demonstrating. He’s sitting on his haunches, a fighter lying on his back in front of him with his legs wrapped around Don’s waist.
“Keep your head in his chest, you’re safe there,” says Don. “Now, when you want to posture up, to punch from up top, move your elbows, put them inside his thighs. You see?”
The men standing around watch intently. When Don is down his elbows are outside his opponents thighs, when he sits up he slips them inside.
“Outside the thigh when you’re down,” he repeats, “inside when you posture up. Why?”
Nobody answers.
“If you’re outside up here he’ll go up for the triangle.” Don shifts his elbow to the outside. Immediately the fighter’s legs, now free, start to shimmy up Don’s shoulders ready to choke him. Don moves his elbow back, blocking the legs. “Get it inside and you have the advantage. Big difference.”
Later, once the sessions over the real experience starts. I’d organised with Don to do a round with him, to try to understand even more what getting in the cage is like. We glove up and get into the ring.
“At, like, 60 percent,” I say, my voice a little high, starting to wonder what the hell I’ve got myself into.
“Don’t worry,” he laughs, “it’s going to be fun.”
We square off. A friend of mine is filming it, me against the number two Muay Thai guy in the world. I’m trying to concentrate, but there’s a few thoughts running through my mind.
“Getting beat,” he’d told me earlier, “is the worst feeling in the world. You feel helpless. It’s like you’re standing on a cliff and the other guy’s trying to push you, and you’re like ‘no, no, I don’t want to go,’ but you’re too tired to stop it.”
He comes towards me. I still don’t know what to do with my hands. Anywhere I think of hitting there’s gloves blocking, eyes calmly watching.
“I don’t really have a face to my opponent,” he’d told me, “it’s just someone there that’s trying to make me look bad. I’m thinking no, that’s not going to happen. You’re going to look bad.”
I go for him, trying something at least. Again there’s that clattering crash in my head as his foot connects.
“When I see that I’m starting to break my opponent down,” I hear him saying, “it’s weird. It’s like the less their energy becomes, the more mine becomes. I feel their spirit’s going down, and mine going higher and higher.”
I drop down, trying to cover up, fists and feet everywhere, knees. “Stay up,” I tell myself, ‘stay out of reach.” An uppercut comes steaming in. I’m shaken but I manage to step away, finding some space. Don winks, he knows he rocked me with that one. He motions for me to come back in.
“Winning a fight,” I hear him saying, “there’s no better feeling. You feel invincible. You’ve gone into the unknown and come out the other side. You’ve proven yourself.”
I take a step forward. We go again. 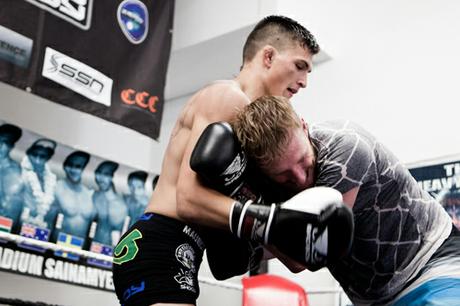